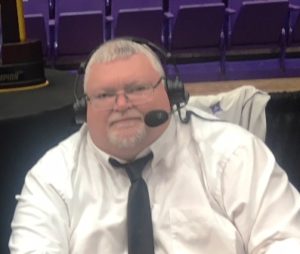 Dan Scott is a 33-year veteran of the media – print, digital and broadcast – and, besides hosting his daily show, works as the Director of Broadcasting and Play-By-Play Voice of Furman University athletics.

Prior to Furman, Dan spent seven years on the Clemson University baseball and women’s basketball broadcasts, plus served as studio host for network football pregame and postgame shows. He also hosted a daily talk show on the Clemson flagship station for 11 years. In addition, Dan has more than a decade under his belt as an award-winning sports editor/writer.

Born and raised in Williamson, WV, Dan is a long-suffering fan of both the Cincinnati Reds and Cincinnati Bengals. Chooses Skyline Chili over the other brands, and sings the praises of Montgomery Inn’s ribs to anyone who will listen.

Dan has been married for nearly 30 years to his wife, Angela. They have two daughters – Samantha, 28, and Becky, 22. He and Angela have two grandchildren.

Most importantly, Dan is a Christian. His prayer is that the show and this website will grow into something that can be used for God’s glory, and to make a difference in the lives of others.

If you’d like more information on having Dan Scott speak to your church, group or organization, please submit the information below.